Changes in TNIV and NIV 2011 Versions 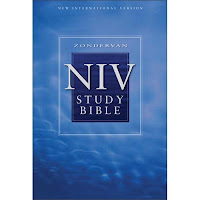 Last time I wrote about why Bible versions matter for a student of the word of God. Every believer should be a student of the word of God. Our taste and convictions should be biblical. For that to occur we should spent more time in studying Bible than other things. If you spend more time with TV or internet then you taste buds will be developed for that and your convictions will be based on that. Many people struggle to enjoy God's word and find it very difficult to focus and read it for even ten minutes. There are so many distractions in our life that many times we feel comfortable being busy and spending time on things which feed our flesh and give pleasure to us. So it’s very important that we develop a taste for the word of God if we intend to grow in our relationship with the creator God.

I want to share with you some concerns which will help you to think and guide you as you select a Bible for yourself or for your family. I do not claim to know everything about this but just want to share the things I found out.

New International version (NIV) is one of the most common used Bible versions. I have used it for a long time now and I have a Study Bible and Life Application Bible of NIV. Wikipedia says that "The New International Version is an English translation of the Christian Bible. Published by Zondervan in the United States, it has become one of the most popular modern translations in history." One thing which NIV tried to do and continues to do is that they try to make language easy and appealing to modern culture. Most common version is the 1984 one. In 2005 they came out with another version which was called Today's New International Version (TNIV). Among other differences from the NIV, the TNIV uses gender-neutral language to refer to people. Confessional terms for this kind of language are such as gender-inclusive. Two examples of this kind of translation decision are found in Genesis and Matthew.
Genesis 1:27 reads: "So God created human beings in his own image." Older translations use the word "man" to translate the word ’adam employed in the Hebrew language, the same word used as the proper name of the first man married to the first woman, Eve.

Matthew 5:9 reads: "Blessed are the peacemakers, for they will be called children of God." Here, the Greek word huioi is translated "children" rather than "sons" as found in other modern English translations such as the New American Standard Bible[8] and the Amplified Bible.[9] However, the 1611 Authorized King James Version also renders this passage as "children" rather than "sons". Masculine references to God, such as "Father" and "Son", are not modified from the literal translation in the TNIV.

The original Hebrew of Psalm 1:1 has the word ’ish (man). This is translated in the TNIV: "Blessed are those who do not walk in step with the wicked or stand in the way that sinners take or sit in the company of mockers."

This year they came out with a new version which is much based on TNIV. It’s called NIV and they have discontinued older version. So if you go and buy a NIV bible today most probably you will get a NIV 2011 version.

Note this difference in three versions.

NIV(1984) Here I am! I stand at the door and knock. If anyone hears my voice and opens the door, I will come in and eat with him, and he with me.

TNIV(2005) Here I am! I stand at the door and knock. If anyone hears my voice and opens the door, I will come in and eat with them, and they with me.

NIV(2011) Here I am! I stand at the door and knock. If anyone hears my voice and opens the door, I will come in and eat with that person, and they with me.

NIV also has the issues with words or verses deleted. Some claim that they have deleted about 40 verses. See here http://www.jesus-is-lord.com/nivdelet.htm .

In the last weeks, I had been trying to add more resources to the website. I want to share some updates you can see. Video Messages - h...